The Animator’s Way of Surviving the Crisis

An animator tries to convince his wife that he has a feasible strategy to survive the financial crisis.

About the film
Facing the impending financial crisis, an animator and his wife start arguing about their financial situation. Technically, “The Animator’s Way of Surviving the Crisis“ accomplishes a 100% reproduction of traditional animation techniques – a digital movie with the special magic of pencil and paper. It describes the dilemma that media creators have to face in these times of crisis: Even though they are trained to work creatively at their computer around the clock, they may find themselves totally helpless when practical skills are required. In a crisis, what does a person have to offer who is well versed in nothing but the use of pen and paper?! The romantic ideal imagines the artist to reach top form when faced with a crisis. but reality looks quite different … „The Animator’s Way of Surviving the Crisis“ depicts the contradiction between romantic ideal and grim reality in a humorous way. Again and again, the art of drawing becomes the focal point of the narrative, being advertised as magic bullet against every problem. This ideal becomes increasingly absurd and lacks any foundation in reality – in much the same way in which this film is not really drawn with a pen or on paper. Nevertheless, the end shows a clear tendency to trust in the power of creativity to overcome real obstacles. 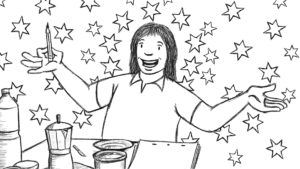 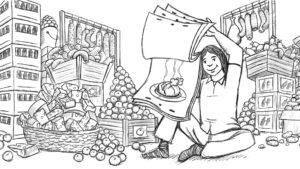 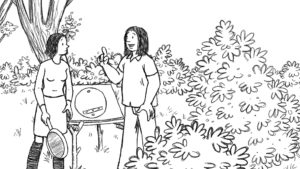 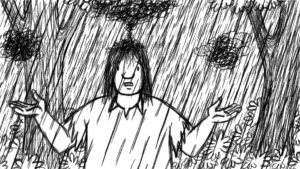